Garabandal Prediction Date and Form of The Great Miracle 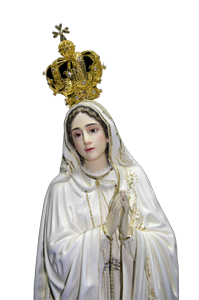 Now for the prediction (That never happened.)

It is ironic that the date is the 13th----like the dates of the 13th of FATIMA. The event in the church is---- EASTER TIME. EASTER is that important event when the MIRACLE is to happen. I have taken to illustrate when EASTER comes in 2017 on the 16th of April. However, HOLY THURSDAY is (3) days before on the 13th of April 2017.
It will be similar to the 100 years, the King's of France delayed consecrating France to the SACRED HEART of JESUS. And it will be 100 years that the Popes delayed in consecrating Russia to the IMMACULATE HEART of MARY, along with the Bishops of the church.

The feast of a Eucharist Martyr is someone that has to still be martyred. I know who it is but I'm afraid it will not sit well with Catholics, If I inform them who that person is.

Now, the prediction of the FORM of the GREAT MIRACLE

Because the date will coincide with an important event in the church, and that event is HOLY THURSDAY, the MIRACLE will take the form of "THE EUCHARIST" we receive at communion, after a good confession.

When you look at the EASTER DATES below, you will determine how I selected the 13th day of April 2017 to coincide with the statement "Conchita" stated years ago. The time is short, even if you consider that the WARNING comes a year before THE GREAT MIRACLE. There will be also much turmoil in the years prior to 2017, when the MIRACLE happens. Wake up people and live in the real world, the year is now 2012.

THESE ARE THE EASTER SUNDAY DATES FOR THE COMING YEARS

I believe that the GREAT MIRACLE will happen on the 13th day of April 2017, because it will be 100 years since 1917, an important date since SISTER LUCIA, according to THE LADY of FATIMA was to establish in the world the devotion to THE IMMACULATE HEART of MARY, which she did well in all her writings.

Also Joey Lamingino (the blind messenger of GARABANDAL) will be already 87 years old in 2017 and he is to receive his eyesight at that time.