Devotion to the Blessed Virgin Mary

The Devotion That Will Save The World 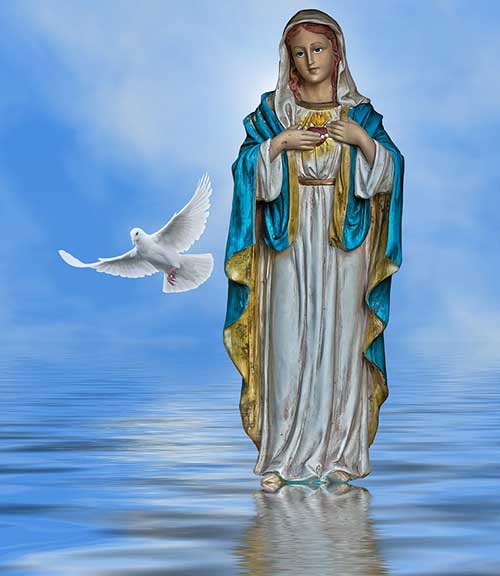 A long time ago in the 15th and 16th centuries, actually between 1594 and 1634, the Blessed Virgin Mary appeared to a cloistered Conceptionist sister in Quito Ecuador named Mother Mariana de Jesus Torres.  Our Lady appeared to her asking that she wished to be known as the Nuestra Senora del Buen Suceso which in English translates to Our Lady of Good Success.

She spoke to Mother Mariana about the future times that were to come for the Catholic Church, particularly during the 19th and 20th Centuries.  She described to her the grave crisis that would take place then,  in the Church and also society in general.

Our Lady of Good Success prophesized to Mother Mariana about the “total corruption of the customs” occurring at the end of the 19th and the greater part of the 20th centuries due to the reign of Satan in society.  All seven (7) Sacraments will come under attack.  Baptism and Confirmation will be difficult to receive.  Even the Sacrament of Confession and Communion will be destroyed.   Holy Eucharist will be profaned.  Many people will die without Extreme Unction (the Sacrament of the dying).  Holy Matrimony will be profaned and it may be done away with.  Even Holy Orders will be ridiculed, oppressed and despised.

At that particular time,  GOD intends to punish the world for the Five (5) major problems that will extinguish FAITH   (1) heresy, (2) loss of vocations, (3) impurity (sexual impropriety)  (4) priests who will become careless in their duties through attachment to wealth and riches (5) and the indifference of those with great wealth to helping with Church problems.

Our Lady of Good Success also said in 1594 why we should be DEVOTED TO THE IMMACULATE HEART OF MARY because she said that this DEVOTION would save the world from destruction.  She predicted that the DEVOTION TO THE IMMACULATE HEART OF MARY would bring about a miraculous restoration of the Church at a time when the situation seemed hopeless.   She felt that this blessing to the BLESSED VIRGIN would be able to sustain the faithful amidst such great trials and temptations. But this blessing was never made known to the faithful.

All of us should read the 40 Marian Apparitions, THE LADY OF GUADALUPE, THE LADY OF LOURDES, THE LADY OF GARABANDAL, etc. etc.  etc.  and especially THE LADY OF FATIMA, with Sister Lucia, Francisco and Jacinta.   The three (3) secrets of FATIMA  and the MIRACLE that was predicted and came true in the October FATIMA apparition, ( the  13th  of October  1917), when the SUN DANCED AT FATIMA.

In the June FATIMA apparition, Sister Lucia asked OUR LADY to heal an old person in town.  OUR LADY said, “if he is converted,  he will be healed within a year.”  Then Lucia asked the all-important  question, “will you take us to Heaven?”  OUR LADY said, “I will take Jacinta and Francisco soon—in two (2) years they are in Heaven.  But she told Sister Lucia that “YOU” are to stay here some time longer., the LORD wants to “USE YOU” to establish in the world A DEVOTION TO MY IMMACULATE HEART, and I promise salvation to all who embrace it, and those souls will be loved by GOD likes flowers placed by me to adore HIS throne.”

They silenced Sister Lucia, so she was not able to establish A DEVOTION TO THE IMMACULATE HEART OF MARY, that is why I added this DEVOTION  to the MEMORARE.

In the MEMORARE I added:  Remember most GRACIOUS Virgin Mary, that never was it known that ANYONE, who FLED to your protection, IMPLORED your help, or SOUGHT your intercession AND IS NOW DEVOTED TO YOUR IMMACULATE HEART, (repeat (3) times) was left unaided.  Inspired by this confidence, I fly to thee Oh Virgin of Virgins, my Mother, to thee I come, before thee I stand sinful and sorrowful, Oh Mother of the word incarnate despise not my petitions, but in thy mercy hear and answer me.

This DEVOTION to save the world is now added to the MEMORARE, and it  will bring about the re-establishment of what will be the catalyst to restore the Church to its significant influence.  This is the very reason why a Church for the VENERABLES  includes this DEVOTION in the MEMORARE to increase the importance of THE DEVOTION TO THE IMMACULATE HEART OF MARY.

This DEVOTION will demonstrate, the power of the BLESSED VIRGIN, who will crush the head of the serpent at the very moment when evil will appear triumphant.

Remember also, THE DEVOTION TO THE IMMACULATE HEART OF MARY, will be a lightning rod that holds back GOD’s hand from unleashing the formidable punishment that this guilty earth deserves.

OUR MOTHER, assures us of her victory as she told us at FATIMA:  “In the end my IMMACULATE HEART will triumph”.